The end of 2020 is complicated for Ethereum miners. Starting from epoch 382 (approx. December 16), all 4GB GPUs will stop mining the cryptocurrency. The problem is the gradually increasing DAG file size. Luckily, the developers are working hard to find a solution, and they already have one.

DAG is a data block uploaded to the GPU memory when a miner launches. It’s essential to mining because it helps devices to find blocks, ensure the network security, and get a reward for the completed work.

DAG is gradually increasing in size. It grows by 8MB every 30 thousand blocks. With time, GPUs can’t process the file anymore, so miners are forced to mine other cryptocurrencies. In mid-December, 4GB GPUs will stop mining Ethereum. However, the developers have found a way to let them mine Ethereum for longer.

Some 4GB GPUs already can’t mine Ethereum. Possible reasons are old mining software, GPUs from different brands, or Windows OS that is more demanding to resources. The problem is obvious.

What to Do If GPUs Can’t Mine Ethereum

The lolMiner developers (we talk about the miner here) are aware of the upcoming 4GB GPU problem. They have released the updated software version adding the so-called zombie mode for cryptocurrency mining. This mode will enable 4GB GPUs to mine Ethereum even at the beginning of 2021.

Why the zombie mode? Here is a quote by the project developer Wilke Trei, known as Lolliedieb.
I was asked why zombie mode. Well, I found that term fitting. These are cards that are supposed to be dead, yet they continue mining but gradually slower. Like an undead (GPU jargon).

Ethereum mining will be possible with gradually degrading performance.

The new mode is working. As a proof, the developer showed a screenshot where he is mining the cryptocurrency in the test network on epoch 390. The graphics card with 4GB of RAM keeps mining with the hash rate of 23 MH/s. 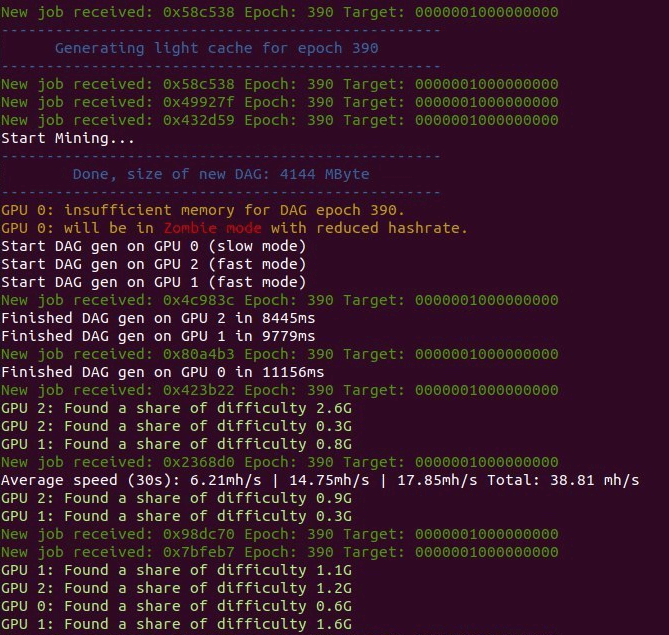 The developer concluded the following.

This mode enables Ethereum mining after epoch 381, the last epoch that lets GPUs work at full capacity. GPU performance will gradually degrade. Hash rate will go down to 95% on epoch 382, and to 55% on epoch 390. It will be only 22% on epoch 400, but mining will go on.

GPUs will give out over 50% of their efficiency in the course of the next eleven epochs. It means 60 additional days of mining after the official shutdown.
In the table below, the developer shows the performance of the AMD RX 580 that normally gives out 30 MH/s. On December 21, it will give out 27.63 MH/s, or 92% of full capacity.

Hash Rate in the Zombie Mode of RX 580 4G is presented below.

Zombie mode will work both on Windows and Linux. Windows will provide the best results, as you can see in the table.

Does it make sense to mine this way? It does. Along with 4GB GPUs, 4GB ASICs will also stop mining Ethereum. The network hash rate will decrease significantly which will lead to lower mining difficulty. The remaining GPUs will make more profit from ETH than before. The advantages are obvious.

Here is what the developer says.

What to do with all 4GB devices? ETC, Beam, and Heaven mining difficulty may skyrocket, so 50% of the profit from 4GB GPUs might still be better than the profit from altcoins.

The developers believe that mining with 4GB GPUs in the new mode after the DAG file increase can bring even better results than before. When miners start having problems with DAG, they are forced to switch to other cryptocurrencies which will make their mining difficulty go up.

Wilke says that the zombie mode is only available for AMD for now, but Nvidia support is coming soon.

It also supports Windows with a smooth mining launch. During Ethereum Classic mining tests, GPUs give out 17.32 MH/s instead of 21.5 MH/s. Such cutback is quite acceptable. 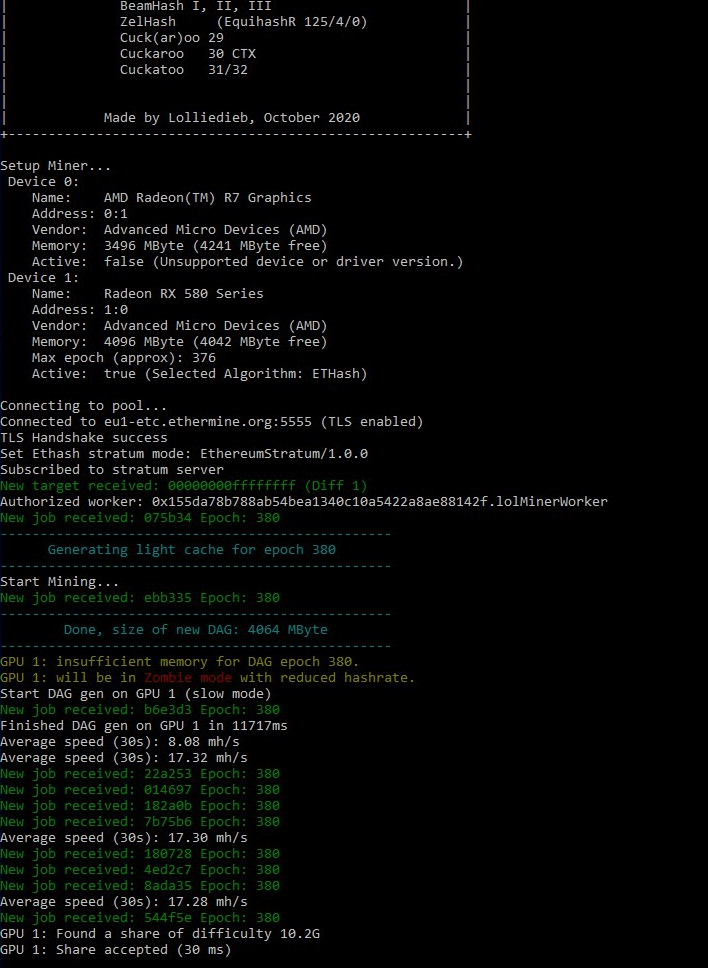 Mining ETC with 4GB GPUs is possible. Miners have a choice now. Soon Ethereum Classic is planning to cut the DAG size down, so that 3GB GPUs could mine cryptocurrencies. We have an article about this update.

The only parameter you can change in the zombie mode is “keepfree”. It gives the number of megabytes the miner won’t use on the card to reserve it for the system.

By default, this value is set to 56MB in Windows and 5MB in Linux, which should work fine. Here is a bat file setting for Windows.

This one is for Linux.

The developer says that if everything is working and mining is on, there is no need to adjust anything. If you are having problems, run a benchmark using the following command. This one is for Windows.

This one is for Linux.

Then see how your miner operates. If it freezes, increase keepfree by 8MB and try again.

For better performance, you can try to decrease the value by 8MB – 48MB for Windows and 0MB for Linux. If it worked, you can try to lower it even more. Repeat until your miner launches and operates properly.

We recommend mining Ethereum in the 2Miners pool. It has a user-friendly interface, advanced settings, and the support of multiple languages. 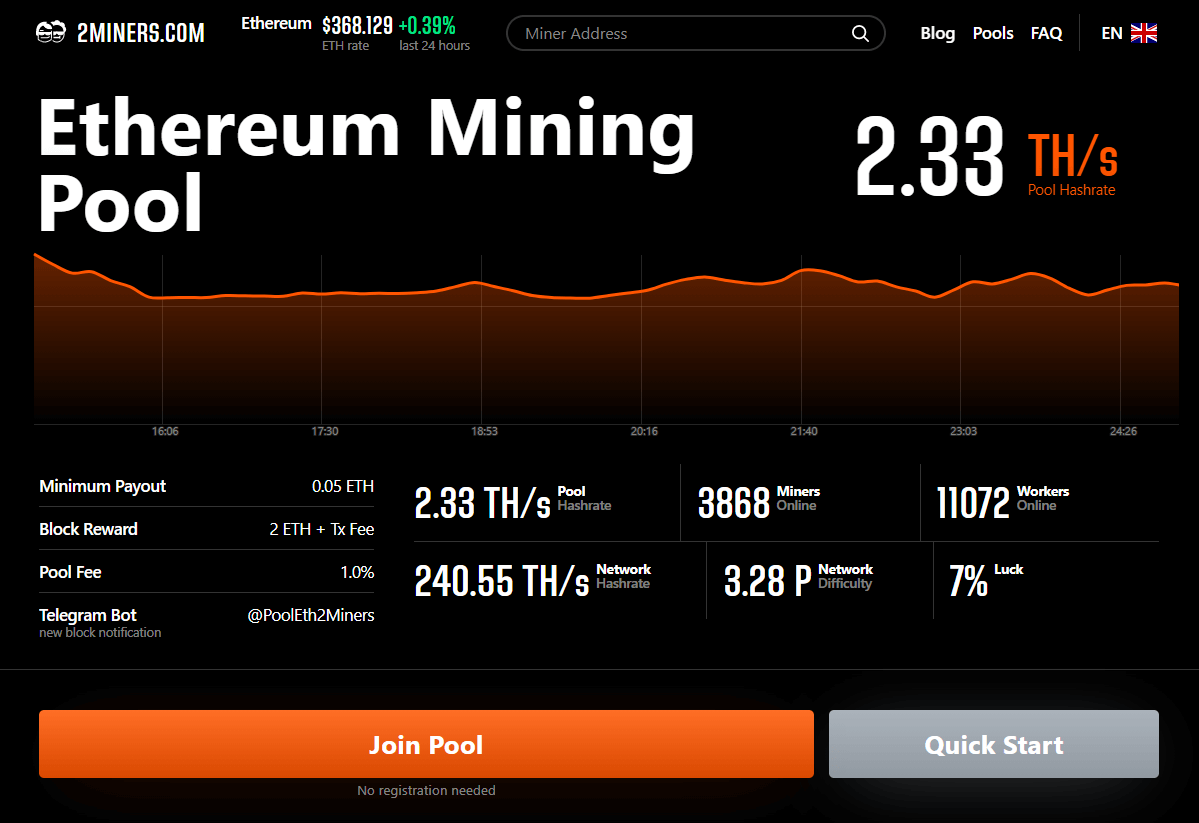 LolMiner has definitely brought some good news. Ethereum mining will go on, and GPU owners will keep making a profit from it. Hopefully, we will see a similar approach to other cryptocurrencies in the future.

Recently TeamRedMiner has launched the 0.7.14 miner version with the advanced mining mode. It is similar to the zombie mode and offers a compromise between the GPU efficiency and overall possibility of mining.

If you want to get the latest updates follow us on TWITTER or join our Telegram Chat.

The post How to Mine Ethereum and Ethereum Classic on 4GB GPUs appeared first on Crypto Mining Blog.